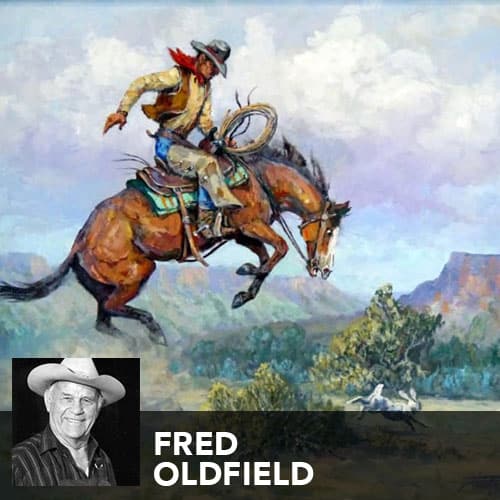 Blending life and art, Fred Oldfield painted his own experiences as a working cowboy in Eastern Washington. Oldfield was born in 1918 on the Yakama Indian Reservation, where his parents leased land. Fred traveled over 1,000 miles in a covered wagon as his parents moved through Washington, Oregon, and Idaho seeking employment. Fred often found work as a cowboy and began sketching his surroundings. Fred sold his first paintings in Alaska, working on discarded 9″x 9″ linoleum tiles.

When the war started, he headed back to the lower 48 to join the Army. After serving in the Army in WWII he went to the Burnley School of Professional Art in Seattle on the GI Bill. He didn’t like commercial art so he began painting murals and his instructors graded his murals to keep him enrolled.

By the mid 60’s Oldfield became a full-time painter and began showing his work at regional and national venues. Fred’s paintings include landscapes and scenes of everyday life in the open spaces of the Pacific NW. As an artist, closely connected to Native communities in Central Washington, Fred portrayed the American Indians with a sympathetic eye, exposing past injustices. He also showcased contemporary Native American Cowboys working in today’s ranching industry.

Fred Oldfield became an institution at the Washington State Fair. He donated a painting for auction annually to the Washington State Fair Foundation’s Scholarship Fund, raising thousands of dollars for the students. For over thirty years he acted as host and center piece for the Celebration of Western Art Show (now the Oldfield Show), the largest western art show in the Pacific Northwest. Also, as an integral part of the Toppenish Mural Society, he painted three murals and participated in several others to benefit his hometown.

As one of the Granddaddy’s of Western Art, it is only fitting that The Fred Oldfield Western Heritage & Art Center be built on the Puyallup Fairgrounds. The Center is dedicated to the preservation of his dream of sharing his love of life, his Western Art and the history of the American West for all generations. The Center houses a full time art program for students of all ages. He felt his most important job was to teach the kids and give them as much painting knowledge as possible.

Fred fought Macular Degeneration but painted every day. He kiddingly said he was in his “Monet Western Art” phase because detail was almost impossible at this stage. An “Unconventional Man” has been a title given to Fred and he certainly went against all odds to spend his life working at his passion – painting! On February 24, 2017, just three weeks before his 99th birthday, Fred’s brush was forever silenced. He left us an incredible legacy which we will carry on!

Works For Sale During the Online Gallery

If you would like to purchase, please use the form below. This form will go directly to the artist. If you are looking to purchase an additional piece of artwork from a different artist, please go to that Artist’s page and fill out the form on his/her page.